​Audio Jane is a female fronted atmospheric rock band from Connecticut. Front-woman Sarah Pech had been writing songs and playing rhythm guitar since the age of 13, when she forced friends to audition for her "band" by singing Cranberries songs repeatedly until they let her be lead singer. She started doing open mics at the age of 17 and never looked back.

Mike Ciunci, of Poor Pluto and Blanket Jackson, provides a natural and intuitive style on drums and Nate Harris, front man and songwriter of the Screwdrivers, completes the rhythm section with his dynamic and melodic bass lines and sweet harmonies. Kevin Lamkins, of the Screwdrivers and The Lonesome While, adds his raucous and inventive guitar playing to the band’s sound.

The band's first EP A Full Bird's Wing, released in 2016, received rave reviews with the Huffington Post affirming "Audio Jane is just damn good." The follow up, 2017's Naive, was similarly well received and won Connecticut Album of the Year in 2018 (CTNnow's Best of Hartford Reader's Poll). Audio Jane appeared on NPR's "Where we Live" and the track "Ocean" was featured on the CW show Nancy Drew. The songs “Baby I Know” and “Starry Eyes” were recently featured in the Netflix series The Midnight Club.

In 2018, the band released their second full length album Letters, which was included in the Hartford Courant's top 20 albums by Connecticut artists that year. The song "I Was Looking at You" was featured in the soundtrack of the film The Never List. The group recorded A Terrible Plan during the pandemic and released it in March of 2021. The Hartford Courant again named the album among Connecticut's top 20 albums of the year.

In 2022, Audio Jane partnered with Red Room Sound Studio to record a live, analog version of their album Letters.In 2021, Harris and Pech joined songwriting forces to co-write the band's next release. The band can be seen at festivals, breweries, and music venues around New England.
"Led by the serenely beautiful vocals of front woman Sarah Pech, 'A Terrible Plan' once again highlights the foursome’s penchant for writing wholly memorable songs that stick with you long after the record has stopped spinning."
-Hartford Courant

"By weaving elements of shoegaze, dream pop, grunge and indie to hypnotic effect, ​Audio Jane have caught our attention with their contemplative and emotional tunes."
-sensiblereason.com 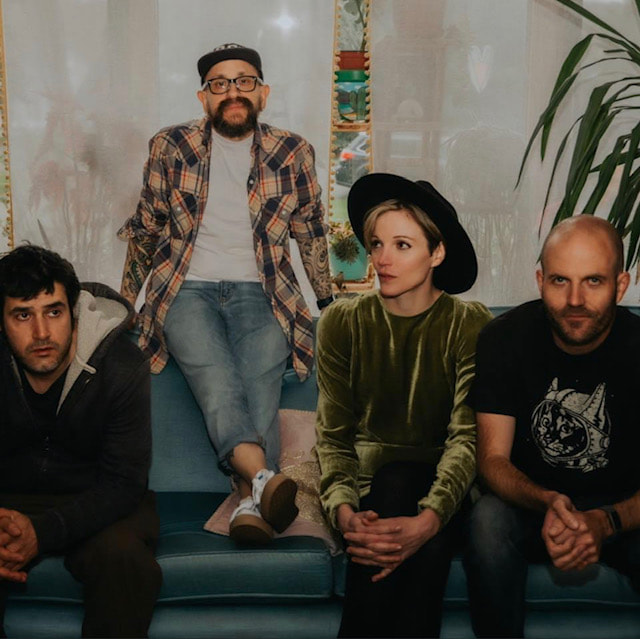